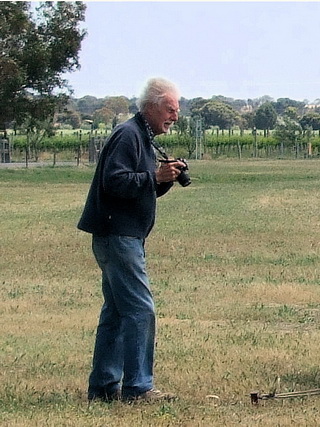 I first met John Smith in early 2008. It was just after starting this web site as I had just joined the Aldinga Aero Club. After attending the club’s monthly meeting I was invited to attend the regular Tuesday morning gatherings (The Ol’e Farts Club). This was when I first met John. He was introduced to me as the Club Historian by the club’s president.

On Tuesdays John would bring in various pieces of aviation history. Air mail, Drink Coasters, Wine Bottles, Buttons and Badges. Many photos of the various aircraft John had come across were also of great interest. John and I had many discussions about aviation.

When I made him aware that I was involved with this web site (5DME.NET) and that it covered all aspects of aviation we made a plan to catalogue his collection of memorabilia for display on this site. John felt strongly about the history being displayed for all to see.

He also informed me that he was a member of a local aviation group. A modest statement to say the least. I later discovered he was the Founder. Back in 1962 he and three friends combined to create WBAG.

Urging me to contact the group (WBAG) as they had a wealth of information that may be useful to record and display. He was keen to give access to any information he could provide.

The 5DME memorabilia collection started with photo shoots where he would bring a small selection of items and we would photograph them against a Blue/Green Screen. John was maticulous in laying out the items for the photograph. We had to lay out the items just right, so all the important information could be seen.

John would describe to me where every article was from and how he attained it. To my sorrow we never got around to entering the items individual history in a database.

During the catalogue process it soon became apparent to me that he really liked balloons. His collection of greeting cards with various photos and drawings of balloons was impressive to say the least. The hand drawn and painted versions were most impressive.

John also collected Covers (Airmail) he would arrange with pilots to carry on new routes or in aircraft that were to fly for the first time. The pilots would sign the mail and it was added to his collection.

I remember days at club meetings where a different or out-of-town aircraft would be on the field at Aldinga. John would be out there with his camera recording shots from every angle. Recently, he even went digital. Surprising given his computer was a pencil and paper note pad.

Even club members would be surprised when he brought in old photos of aircraft at Aldinga. Members would say, “I remember that one!”

We only went to one airshow together at Goolwa. A Fly-in for the Aviation Historical Society. There was not one plane that was missed by then lens of John’s camera. To my disappointment now, we will not be able to have days like this again. 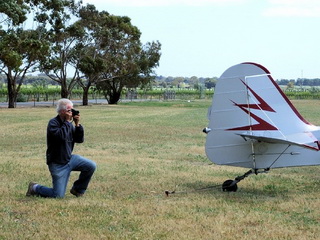 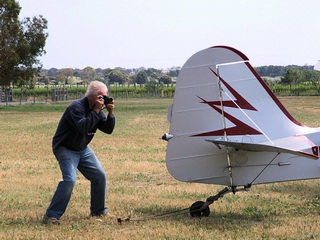 I will remember John every time I take a photo of aircraft.

Selected items from John’s Memorabilia Collection can be seen in the 5DME Gallery.

Story and photos by David H.