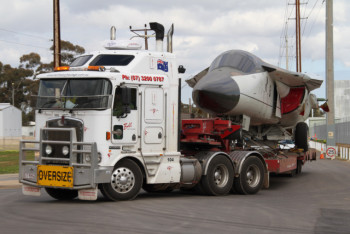 5DME attended the official Media Event for the return of ex-ARDU F-111 A8-132 to RAAF base Edinburgh. We interviewed a past F-111 flight officer and spoke with the CEO of ARDU. Edinburgh is where F-111 A8-132 began it’s life for ARDU in Australia. More pictures to be added to our gallery soon.

The aircraft was not unloaded while we were there but the crew from Bell Heavy Haulage maneuvered the rig precisely and the Samaras crane team along with Airforce personnel lifted the wings onto dollies with precision. Hopefully, the aircraft will be reassembled over the next few weeks.

A8-132 a retired Royal Australian Air Force F-111C has just ended a four day road trip which began on Monday 8th August 2011 at Amberley RAAF Base in Queensland. The aircraft passed through several regional towns in Queensland, New South Wales, Victoria and South Australia before ending its journey at the Edinburgh RAAF Base. The aircraft had its wings and tail fin removed for the journey.

F-111’s were in service until the fleet was retired in December 2010 after 37 years of operation. A8-132 is to be on display at Edinburgh as of next year. A historic aircraft in its own right due to its extensive use as a flight trials aircraft by ARDU (Aircraft Research & Development Unit) at Edinburgh between 1979 and 1998. A8-132 was conceivably the most important F-111 in the fleet as it was used in the role in clearing new weapons for use. 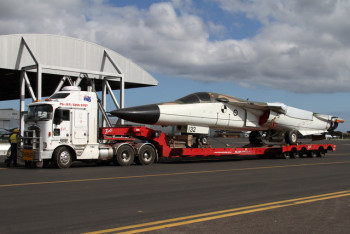 30+ major trials were conducted by ARDU using A8-132. After its last trial in 1998 the F-111 A8-132 returned to the fleet to resume duties as a strike aircraft. The colour scheme of white lower surfaces and a camouflage upper surface provided contrast images when testing release of weapons during its time with ARDU.

A8-132 will be reassembled over the coming weeks and will be placed on public display next year. 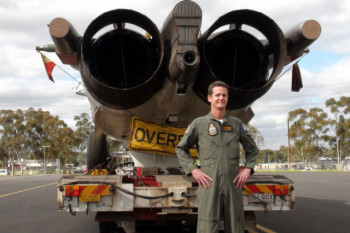