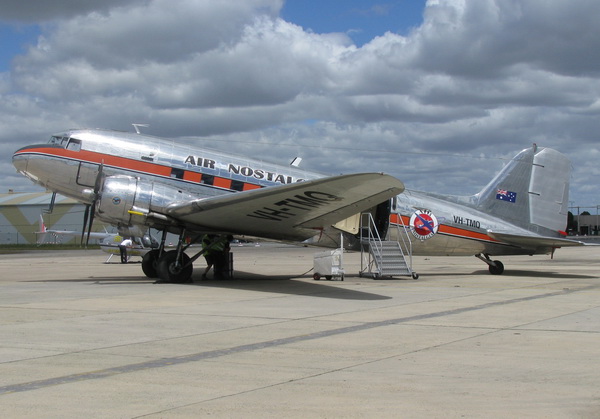 On Friday 17/12/10 5DME was part of a charter flight of the DC-3 VH-TMQ ‘Air Nostalgia’ from Essendon Airport. Crew for the day were: Captains Alan Searle (ex-TAA & Qantas), Lionel Griffiths (ex-Ansett) and the hostie Annie Duff (Viscount & Electra hostie with Ansett-ANA in the early sixties). The pilots were almost as old as the DC-3 first flight.

We boarded at 1300 & the engines started with taxiing to the run-up bay near the holding point at RW26 to check the magnetos. We were rolling at 1315 & at 1317 lifted off and with a left turn we headed for the Melbourne CBD. This was followed by some air-to-air shots by an R44 helicopter over Albert Park. We then tracked south along the coast of Port Phillip Bay to Portsea. Returned to Essendon via a few circuits around RAAF Base Point Cook, overhead the Westgate Bridge followed by a landing on RW35 at Essendon at 1417. This was exactly a one hour flight. 5DME were happy to have celebrated a great milestone in aviation. And hope to be there for the 100th Anniversary. See Video HERE