Over the past weeks 5DME have been directly involved with the Operational Trial of Airport Watch at Adelaide Airport. This week the trial is over and we bring to you our video summary of the period.

Previous information about the Operational Trial of Airport Watch: 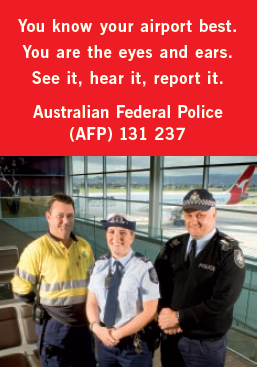 19th April 2010. Today 5DME attended the launch of a Neigbourhood Watch style scheme called AIRPORT WATCH which is to be trialled at Adelaide Airport. The programme involves airport staff, airlines, crews, retailers and others operating from airport grounds participating by reporting suspicious activity.

The OTS (Office of Transport Security) in collaboration with the Australian Federal Police, SA Police and AAL have developed the scheme. Adelaide Airport has stepped forward to be the trial host.

Adelaide Airport on any given day has 10,000 staff/workers in attendance from the various operators, contractors and services. That’s 10,000 pairs of ears & eyes that could possibly report out-of-the ordinary activities.

Airport Watch seeks to strengthen the security culture by involving the airport community. Incidents that might usually go unreported might now be reported due to the awareness Airport Watch will bring to the aviation community.

The idea being: If you see something suspicious, REPORT IT.

What makes a person suspicious is not the colour of their skin, their ethnic culture, or their gender. It is what they do, where they are, how they are behaving.

The aviation enthusiast community in Adelaide has been included in the trial.

Visitors to the airport are encouraged to report suspicious activity.

For example, people that could report suspicious activity may include:

Once the trial is completed Airport Watch is likely to be introduced at a number of Australian airports.

NOTE: As of 2011 Adelaide Airport has adopted the Airport Watch Program and now has active group participating with Airport Watch. Other airports should follow when OTS proceeds with the official roll-out. See the 5DME AIRPORT WATCH page for details.