CFS Media & Airservices Australia for their assistance with this story. 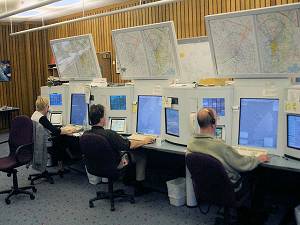 As far as Adelaide ATC goes, we do have some special procedures to facilitate the firefighting operations. Airservices has Letters of Agreement with the operators involved in which each of the aircraft is allocated a semi-permanent transponder code. As the LoAs are reviewed annually before the fire season, the operators usually advise us which aircraft are going to be based where, and we then allocate codes from a special series of numbers that cannot be allocated by our Flight Data Processor to any other flight plan. Callsigns depend on task, as described in the main article and include Bomber (BMBR), Helitack (HLTK), Firebird (FBIR) and Bird-dog (BDOG), to which is added a 3 digit number starting with 5 to denote SA operations.

Being based at Woodside or Brukunga, the aircraft can get airborne up to A025 without entering controlled airspace, and this enables them to move over a lot of the hills area without needing to talk to us or obtain a clearance. Our radar at Summertown picks them up on their unique codes as soon as they are airborne, so we know almost instantly that there’s an operation about to happen somewhere and just wait to see what direction they head off in. Sometimes they are off to a fire, and sometimes they may be just repositioning to another area of the state where there are fires burning, or where the danger is higher than it is locally.

We are also aware of the usual fire hot spots in the hills face zone which are likely sites – Ansteys Hill, Black Hill, Onkaparinga Gorge etc – and can anticipate a call for clearance accordingly. Despite their workload, the pilots work really well with us, have excellent airspace awareness, and give as much notice as possible for clearances when required. On spotting one of the allocated codes, we can either put a radar tag (RADTAG) onto it for instant identification, or we have the option if time permits, of calling up what we call Stereo Flight Plans and activating them. The stereo plans are aircraft specific, are held permanently in our Flight Data Processor and are amended as required when new LoAs are signed. They provide a template, and have basic details in them, so for example we’ll know BMBR582 is an AT8T aircraft type, registration VH-ODZ etc, departing from and arriving at Woodside and operating at about A030. When the pilot notifies the actual location of the fire, we can often have a TAAATS flight plan already activated and a label on the aircraft; all that remains to be done is let our system know via a couple of mouse clicks where exactly the aircraft is going and at what level.

It certainly gets quite busy when one, then two, then three or more tracks appear near Woodside at the same time, and other firefighting aircraft may be at Parafield wanting to get to the same location. We then get Parafield Tower coordinating more flight details with us, and maybe a couple more Bombers call up out of Maitland, say, also tasked to an Adelaide Hills fire. And of course, then the media helicopters all want to get into the mix as well, and probably the Police chopper too. With the aircraft operating at low level, they do pop in and out of radar coverage quite frequently, so it creates quite a workload keeping up with which aircraft are still on scene and which have gone back to base to reload. If the operations are in controlled airspace we also have to issue traffic to everyone about everyone else as far as is practicable.

And all the while, the usual traffic continues.

There’s a lot of talking involved, not only on the air but just coordinating between the different control positions in the room. We try not to talk any more than absolutely necessary to the firefighting crews as of course they are working other radio channels with fire control and each other, let alone the difficulty of low level flying, targeting the fire, putting up with turbulence and smoke etc. The easiest thing to do is just let them get on with it and keep our other traffic well clear.

Fortunately, if the fire is near to Adelaide it is often only just inside the 11 miles of the control zone and most of our other operations overfly the activity. If that is not the case, then we simply have to divert aircraft away from their normal flight paths to give priority to the fire fighting ops. We’re allowed to ignore noise abatement flight paths for jets in those circumstances since life and property is at risk on the ground, so occasionally folks may notice jets in a part of the sky where they usually aren’t.

All part of the interesting mix of summer traffic we handle here.

Back to STORIES index page