The 16th February 2011 is the 56th anniversary of the opening of the Airport for airline services. Previously Parafield had been the main airport for the City of Adelaide. 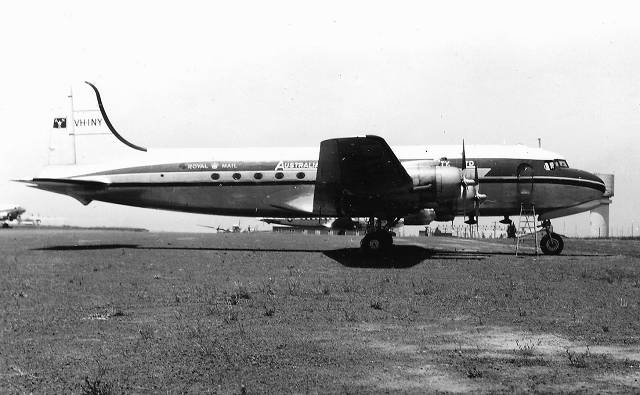 At 6am on Wednesday 16 February 1955 the Australian National Airways (ANA) Douglas DC-4 Skymaster VH-INY ‘Laxapana’ touched down at Adelaide to become the first scheduled airline flight into the new airport. Piloted by Captain Brian McKenna and First Officer Cliff Shortland ‘Laxapana’ had just completed a 6.5 hour scheduled flight no. 215 from Perth. The Air Hostesses were Pat Cominie and Barbara Matthews.

‘Laxapana’ remained at Adelaide on the first morning for only sufficient time to refuel and embark passengers for Melbourne. ANA had the honour of landing the first scheduled flight by only a few minutes as a Trans Australia Airlines (TAA) Douglas DC-4 operating flight 513 from Perth touched down shortly thereafter.

A highlight of the opening day at Adelaide was the arrival of the new TAA Vickers Viscount VH-TVB ‘Gregory Blaxland’. This was the first turbo-prop airliner to be placed into airline service in Australia. The Viscount took 1 hour 40 minutes to complete the flight from Melbourne.

Adelaide Airport has changed significantly in the last 56 years with the volume of passengers and flights showing no comparison.

Total 18 flights with the total of 664 seats